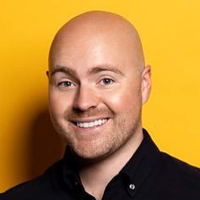 Having been a call centre trainer for 6 years since leaving college, then a full-time wedding musician for 10 years as well as a carer, Paddy tried stand-up comedy for the first time at an open-mic night in March 2018. He quickly became a local sensation both on the stand-up circuit and further afield online creating countless viral observational and character-based sketches on his PaddyRaffComedy social media platforms, racking up millions of views and gaining 150,000 followers across Facebook, Twitter, Instagram & YouTube. His unprecedented level of success on the local stand-up scene saw him become the biggest selling comedian in Northern Ireland within 2 years of taking to the stage selling out dozens of shows in some of NI’s most prestigious venues including the Ulster Hall. Paddy’s viral content during the pandemic saw his reputation spread further to the rest of the UK and beyond, leading to wider UK & Ireland media attention such as an Irish Times article calling him the ‘Comedy star of the Coronavirus lockdown’. Paddy hosted BBC1’s Stand Up For Live Comedy in Belfast in September. BBC Northern Ireland commissioned him to create a 30-minute pilot sketch show during lockdown and ‘The Paddy Raff Show’ was broadcast on BBC One NI in July 2020, which was nominated for a RTS Award, BBC1NI commissioned a Christmas Special in 2020 and full series aired in February 2021.